The Italian broadcaster announced that they intended on sending an entry to the Europa Song Contest for the first time in December 2016. Their debut entry was later revealed to be "Tatuami" performed by Claudia Megrè. After be not qualifie for the great final 14th with 36 points.

During the the second edition of the competition it was announced that the italian singer and newcomer Enrico Papi will represent the country in the second edition with her song "Mooseca". He was placed 12th with 97 points in final. Sadly in the 3rd edition, Italy wasn't be qualifie. In the 4th edition Italy finished 13th. 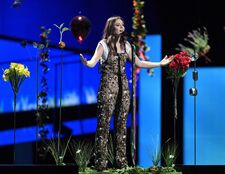 Shortly after the end of the fourth contest, the Italian singer Francesca Michielin was announced to represent the country with the song "Vulcano" in Reykjavík. At semi-final be 1st at Semi-Final with a total of 237. And at great final, Italy be placed 4th with 289. This is the best results ever of Italy and due of this Italy is automaticly qualifie (take part to the big 6) for the six edition in Dnipro.

In Dnipro, Betta Lemme with the song "Bambola" reprensents Italy for be 11th. And finally at the 7th edition in Akranes, Italy realized a bad performance with "Tropicale" by Francesca Michielin be not qualify with 87 points at 17th places.

After the end of the height contest, the HoD annonced the 4th August 2018 in Roma the participation of Italy and normally an internal selection be organized. But for the first time a national selection may be considered, but before that studies should be conducted to find out if this national selection is reasonable with a good budget for RAI.

And finally the 11th August the HoD comfirm a National Selection for the first time called Sanremo. Finally after the national final the song "Da Zero a Cento" performed by Baby K was elected for represent Italy at Sarajevo.

Italy's voting statistics. The tables list the points given or received by Italy in the semi-finals, the finals and a total of both. However, the points given in Pre-Qualification Rounds are not included.

Italy has so far competed in a total of 7 shows and 3 semi-finals and five finals. The country has both experienced being in both halves, both events being the final.

Table key
First half
Second half
Not Qualify
Big 6

Since the third edition there have been different commentators and spokespersons for Italy. However, all the events were broadcasted by RAI, on both radio and television.

The spokespersons have been different in each edition.

The country participated in 8 shows but broadcast all shows from the first edition until height edition. The country's viewing figures progressed as time passed by and the contest gained more popularity in Italy. The figures greatly increased from the 4th edition due to the start of the Italian participation in the contest.

Italy made their debut in the height edition (for ESC 8). It was a contest for entries that failed to represent their country in their respective national selections.

Retrieved from "https://eusc.fandom.com/wiki/Italy?oldid=11572"
Community content is available under CC-BY-SA unless otherwise noted.