Europa Song Contest 8, often referred to as ESC 8, was the eighth edition of the Europa Song Contest. The contest was hosted in Sarajevo, Bosnia and Herzegovina, after Maya Berović won the seventh edition of the contest with "Nisam Normalna". It was the first time that Bosnia and Herzegovina hosted the contest. BHRT chose Olympic Hall in Sarajevo as the host venue for the edition while Seka Aleksić was selected as the presnter.

Forty-seven countries participated in the edition. Austria, Bulgaria, withdrew from the edition while Azerbaijan, Latvia and Montenegro returned after their one-edition absence and Georgia after two editions.

For further information see Sarajevo
Sarajevo is the capital and largest city of Bosnia and Herzegovina, with a population of 275,524 in its current administrative limits. The Sarajevo metropolitan area, including Sarajevo Canton, East Sarajevo and nearby municipalities is home to 555,210 inhabitants. Nestled within the greater Sarajevo valley of Bosnia, it is surrounded by the Dinaric Alpsand situated along the Miljacka River in the heart of Southeastern Europe and the Balkans.

Sarajevo is the political, social and cultural center of Bosnia and Herzegovina, a prominent center of culture in the Balkans, with its region-wide influence in entertainment, media, fashion, and the arts.

Due to its long and rich history of religious and cultural diversity, Sarajevo is sometimes called the "Jerusalem of Europe" or "Jerusalem of the Balkans". It is one of only a few major European cities which have a mosque, Catholic church, Orthodox church and synagogue within the same neighborhood. A regional center in education, the city is also home to the Balkans' first institution of tertiary education in the form of an Islamic polytechnic called the Saraybosna Osmanlı Medrese, today part of the University of Sarajevo.

The running order of the semi-finals and the final of the edition was by producers appointed by both the EBU and the host broadcaster BHRT. 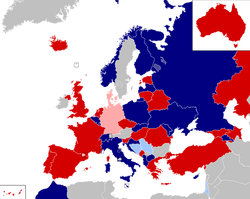 Forty-seven countries confirmed their participation for the edition. Four countries returned to the contest; Azerbaijan, Georgia, Latvia and Montenegro.

However, Austria, Bulgaria, Faroe Islands, Ireland and Sweden withdrew from the edition

Twenty countries participate in the first semi-final. Andorra, Denmark and Germany also voted in this semi-final. The highlighted countries qualified for the final.

Twenty-one countries participate in the second semi-final. Bosnia and Herzegovina, Israel and Serbia also voted in this semi-final. The highlighted countries qualified for the final

Retrieved from "https://eusc.fandom.com/wiki/Europa_Song_Contest_8?oldid=11674"
Community content is available under CC-BY-SA unless otherwise noted.