Europa Song Contest 7, often referred to as ESC 7, was the seventh edition of the Europa Song Contest. It was held in Akranes, Iceland as it was the host's country chose Akranesvöllur while Greta Salóme was selected as the presenter.

Forty-eight countries participated in the edition including Austria, France, Slovakia, and Turkey returning with Austria after two editions, and the rest after a one-edition break. However, Azerbaijan, Latvia, Liechtenstein and Montenegro announced their withdrawal from the seventh edition.

Bosnia and Herzegovina was crowned as the winner of the edition with the song "Nisam Normalna" performed by Maya Berović. The song gathered a total of 350 points, 0 points ahead the runner-up, Serbia. Denmark finished on third place, while Germany, Andorra and Israel completed the top 6 of the edition.

For further information see Akranes
Akranes was settled in the 9th century by the brothers Þormóður and Ketill, sons of Bresi. They came from Ireland. The town started to form in the mid-17th century as a fishing village. In 1942, it was formally chartered, and in the following years it had the biggest surge in population in its history. Industry has been a big and growing employer: a cement plant has been operated in the town since the 1950s, and an aluminum smelting plant has been in operation near the town since 1998. The fishing industry remains the town's most important source of employment, but commerce is also a significant employer as Akranes acts as a service center for a large rural region surrounding it. The town is expected to grow further in the coming years because of growing industry and improvements of transportation to the Reykjavík area, following the construction of the 5.57 km-long (3.46 mi) Hvalfjörður Tunnel which was opened in 1998, one of the world's longest underwater road tunnels. Akranes has a strong football tradition. The local team, ÍA, has for many years been among the best of the Icelandic football league. Former Sheffield Wednesdayand Arsenal midfielder Siggi Jonsson was born in Akranes and had three spells as a player with ÍA.

The Akranes Folk Museum, formerly known as the Akranes Museum Centre, consists of a folk museum, an exhibition hall and a few 19th century buildings and boats in Garðar, Akranes, Iceland. The museum houses a few exhibitions, as well as a large open-air museum, which consists mainly of houses and boats, including the old Garðar house and the 86-tonne ketch Sigurfari.

The seventh edition logo of the Europa Song Contest was previously designed by George Rospier the main producer of Europa Song Contest. The main idea was to transmit something shocking, intense and energetic due to the some issues that the contest was suffering in the last edition. Overcoming those issues between all the producers and participants, led to this magnificient logo and everything is possible if you want to the Do It All which that's where the Support Banners was made them by the Icelandic broadcaster RÚV.

The running order of the semi-finals and the final of the edition was by producers appointed by both the EBU and the host broadcaster RÚV. 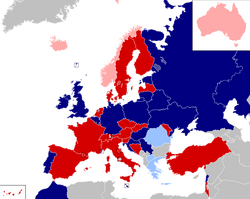 However, Azerbaijan, Latvia, Liechtenstein and Montenegro withdrew from the edition

Twenty-one countries participate in the first semi-final. Australia, Iceland and Norway also voted in this semi-final. The highlighted countries qualified for the final.

Twenty-one countries participate in the second semi-final. FYR Macedonia, Greece and Romania also voted in this semi-final. The highlighted countries qualified for the final.

Twenty-six countries participated in the final, with all forty eight participating countries eligible to vote.

Retrieved from "https://eusc.fandom.com/wiki/Europa_Song_Contest_7?oldid=10273"
Community content is available under CC-BY-SA unless otherwise noted.