Europa Song Contest 4, often referred to as ESC 4, was the fourth edition of the Europa Song Contest. It was held in Thessaloniki, Greece as it was the host's country chose Kaftanzoglio Stadium while Tamta was selected as the presenter.

Forty-six countries participated in the edition including Bosnia-Herzegovina, Georgia and Montenegro that made their debut appearance in the edition with Cyprus, France, Latvia, Monaco. Slovakia and Slovenia returning. Andorra, Czech Republic, Faroe Islands, FYR Macedonia, Malta, San Marino and Sweden announced their withdrawal from the fourth edition.

Iceland was crowned as the winner of the edition with the song "The Lunatics" performed by Gladius ft. Klara Elias. The song gathered a total of 330 points, 7 points ahead the runner-up, Moldova. Portugal finished on third place, while Slovakia, Turkey and Switzerland completed the top 6 of the edition.

For further information see Thessaloniki
Thessaloniki (Greek: Θεσσαλονίκη, Thessaloníki [θesaloˈnici]), also familiarly known as Thessalonica or Salonica, is the second-largest city in Greece, with over 1 million inhabitants in its metropolitan area, and the capital of Macedonia, the administrative region of Central Macedonia and the Decentralized Administration of Macedonia and Thrace. Its nicknameis η Συμπρωτεύουσα (Symprotévousa), literally "the co-capital", a reference to its historical status as the Συμβασιλεύουσα (Symvasilévousa) or "co-reigning" city of the Eastern Roman (Byzantine) Empire, alongside Constantinople.

Thessaloniki is located on the Thermaic Gulf, at the northwest corner of the Aegean Sea. It is bounded on the west by the delta of the Axios/Vardar.

The city of Thessaloniki was founded in 315 BC by Cassander of Macedon. An important metropolis by the Roman period, Thessaloniki was the second largest and wealthiest city of the Byzantine Empire. It was conquered by the Ottomans in 1430, and passed from the Ottoman Empire to Greece on 8 November 1912. 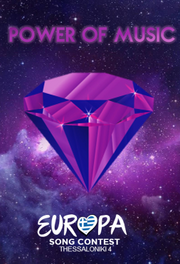 The fourth edition logo of the Europa Song Contest was previously designed by George Rospier the main producer of Europa Song Contest. The main idea was to transmit something shocking, intense and energetic due to the some issues that the contest was suffering in the last edition. Overcoming those issues between all the producers and participants, led to this magnificient logo and everything is possible if you want to the Power of Music, which that's where the A note the Support Banners was made them by the Greek broadcaster ERT.'

The running order of the semi-finals and the final of the edition was by producers appointed by both the EBU and the host broadcaster ERT. 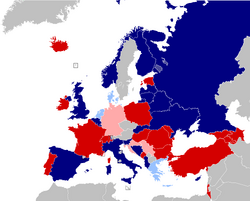 Main article: Pre-Qualification Round 1
Six countries participated in the first pre-qualification round. The Russia and Turkey qualifed to the semi-finals, while Austria, Kazakhstan, Lebanon and Morocco were eliminated.

Nineteen countries participate in the first semi-final. Croatia, Germany and Serbia also voted in this semi-final. The highlighted countries qualified for the final.

Eighteen countries participate in the second semi-final. Denmark, Greece and the Netherlands also voted in this semi-final. The highlighted countries qualified for the final.

Retrieved from "https://eusc.fandom.com/wiki/Europa_Song_Contest_4?oldid=11691"
Community content is available under CC-BY-SA unless otherwise noted.