Europa Song Contest 2, often referred to as ESC 2, was the second edition of the Europa Song Contest. It was held in Oldenburg, Germany as it was the host's country chose EWE Arena while Anke Engelke was selected as the presenter.

Forty-one countries participated in the edition including Austria, Azerbaijan, FYR Macedonia, Iceland, Latvia, Lebanon, Malta, Poland, San Marino, Slovakia and Slovenia that made their debut appearance in the edition. Albania, Cyprus, Monaco and Portugal announced their withdrawal from the second edition.

The winner of the second edition was Sweden the song "A Million Years"" performed by Mariette, which scored 141 points with a 13 points lead ahead the second time runner-up, Malta. Lithuania finished on third place, while Hungary, Czech Republic and the United Kingdom completed the top 6 of the edition.

Oldenburg or simply Oldenburg is an independent city in the state of Lower Saxony, Germany. During the French annexation (1811–1813) in the wake of the Napoleonic war against Britain, it was also known as Le Vieux-Bourg in French. The city is situated at the Rivers Hunte and Haaren, in the northwestern region between the cities of Bremen in the east and Groningen (Netherlands) in the west. It has a population of 160,907 (December 2014).

The city is the place of origin of the House of Oldenburg. Before the end of the German Empire (1918), it was the administrative centre and residence of the monarchs of Oldenburg.

Archaeological finds point to a settlement dating back to the 8th century. The place was first mentioned in 1108 as Aldenburg in connection with Elimar I (also known as Egilmar I) who is now commonly seen as the first count of Oldenburg. The town gained importance due to its location at a ford of the navigable Hunte river. Oldenburg became the capital of the County of Oldenburg (later Duchy, Grand Duchy, and Free State), a small state in the shadow of the much more powerful Hanseatic city of Bremen.

In the 17th century, Oldenburg was a wealthy town in a time of war and turmoil and its population and power grew considerably. In 1667, the town was struck by a disastrous plague epidemic and, shortly after, a fire destroyed Oldenburg. The Danish kings, who were also counts of Oldenburg at the time, were not much interested in the condition of the town and it lost most of its former importance. In 1773, Danish rule ended. It was only then that the destroyed buildings in the city were rebuilt in a neoclassicist style.[3] (In German, the "neoclassicist style" of that period would usually be called klassizistisch, while neoklassizistisch specifically refers to the classicist style of the early 20th century.)

Germany on 26 May 2017 announce that the canditates cities for the second edition was Hamburg Exhibition Centre in Hamburg with Capacity for contest 5,000. Esprit Arena in Düsseldorf with Capacity 66,500 and the last city was Oldenburg with venue EWE Arena with capacity 8,000. On 28 May 2017 German braodcaster (NDR) select for location Oldenburg - EWE Arena. 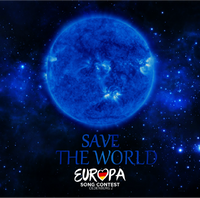 The official logo of the second edition of the contest.

The official logo of the second edition of the contest.

The second edition logo of the Europa Song Contest was previously designed by George Rospier the main producer of Europa Song Contest. The main idea was to transmit something shocking, intense and energetic due to the some issues that the contest was suffering in the last edition. Overcoming those issues between all the producers and participants, led to this magnificient logo and everything is possible if you want to Save The World, which that's where the A note the Support Banners was made them by the German Broadcaster NDR.

The running order of the semi-finals and the final of the edition was by producers appointed by both the EBU and the host broadcaster NDR. 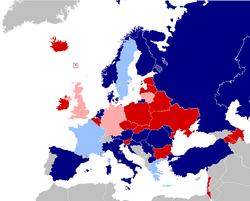 Demy return to represent this time her home country Greece after see wins the Greek National selection called The Greek Decision with the song "You Fooled Me". See previously represent Cyprus in the first edition featuring a Greek Rapper Oge and a Cypriot singer Charis Savva with the song "Me Oplo Tin Foni Sou".

Seventeen countries participated in the first semi-final. Germany, Lithuania and the United Kingdom also voted in this semi-final. The highlighted countries qualified for the final.

Eighteen countries participated in the second semi-final. France, Greece and Sweden also voted in this semi-final. The highlighted countries qualified for the final.

Twenty-six countries participated in the final, with all forty-one participating countries eligible to vote.

Community content is available under CC-BY-SA unless otherwise noted.
Advertisement