Europa Song Contest 1, often referred to as ESC 1, was the debut edition of the Europa Song Contest. It was held in Sofia, Bulgaria as it was the host's country chose Arena Armeec while Poli Genova was selected as the presenter.

Germany was crowned as the winner of the edition with the song "Aulë und Yavanna" performed by Oonagh. The song gathered a total of 156 points, 33 points ahead the runner-up, Greece. France finished on third place, while Lithuania, United Kingdom and Sweden completed the top 6 of the edition.

Sofia is the capital and largest city of Bulgaria. The city has a population of 1.26 million, while over 1.5 million people live in its functional urban area. The city is located at the foot of Vitosha Mountain in the western part of the country, within less than 50 kilometres (31 mi) drive from the Serbian border. Its location in the centre of the Balkan peninsula means that it is the midway between the Black Sea and the Adriatic Sea, whereas the Aegean Sea is the closest to it.

Sofia has been an area of human habitation since at least 7000 BC.Being Bulgaria's primate city, Sofia is a hometown of many of the major local universities, cultural institutions and commercial companies.Sofia is one of the top 10 best places for start-up business in the world, especially in IT technologies.Sofia is Europe's most affordable capital to visit as of 2013.

For the longest time the city possessed a Thracian name, derived from the tribe Serdi, who were either of Thracian, Celtic, or mixed Thracian-Celtic origin.The Serdi and the name of emperor Marcus Ulpius Traianus (53 – 117 AD) prompted the Romans to give the city the combinative name of Ulpia Serdica;Ulpia is derived from an Umbrian cognate of the Latin word lupus, meaning "wolf."It seems that the first written mention of Serdica was made during his reign and the last mention was in the 19th century in a Bulgarian text . During the Romans civitas Serdenisium was mentioned the "brightest city of the Serdi" in official inscriptions. The city was major throughout the past ever since Antiquity, when Roman emperor Constantine the Great referred to it as "my Rome", and it nearly became his capital.

The draw that determined the semi-final allocation was held on 1 April 2017 at the Arena Armeec. The thirty-three countries were divided into six pots, based on their geographical place. Each time a country was drawn from the pot, its semi-final and half of the semi-final was determined. Switzerland at first decide to debut in the first edition but later decide to withdraw. 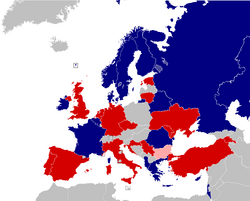 Sixteen countries participated in the first semi-final. Bulgaria also voted in this semi-final. The highlighted countries qualified for the final.

Sixteen countries participated in the second semi-final. The highlighted countries qualified for the final.

Twenty-one countries participated in the final, with all thirty-two participating countries eligible to vote.

Retrieved from "https://eusc.fandom.com/wiki/Europa_Song_Contest_1?oldid=11150"
Community content is available under CC-BY-SA unless otherwise noted.