Start a Wiki
Australia debuted in the sixth edition of Europa Song Contest. The broadcaster responsible for all the country's activities in the contest since its debut is SBS. The country always used their national selection, The Next Voice ever since their debut in the 6th edition.

Before our debut, Australia tuned in to the contest since the very first edition in Bulgaria. Surprisingly, just like the Eurovision Song Contest, it has attracted and gained over 1.5-2 million viewers online and live on TV. This has led to the question, 'Can we participate?'. SBS has sent tons of letters for the past 5 editions talking about considerations of participation.

After a huge announcement on the SBS News, it has been confirmed that we have been invited to be a regular participant in the Europa Song Contest from the sixth edition onwards. This announcement attracted lots of musicians and viewers, with musicians already producing music to send. It was also announced that they were going to use a national selection, so anyone can take part. 1,200+ submissions have been received, and 28 were selected for the national selection. After the final of the National Selection, Delta Goodrem went to Ukraine with the song, "The River".

After the announcement, Delta went on a mini tour around the country, including cities like Hobart, and Melbourne. After the 5th & last tour, she headed for Dnipro to start with rehearsals on stage. The broadcaster also aired a month-long coverage special for the contest called "#Instincts: The Australian Debut", which will include rehearsal coverages, interviews with contestants, tour around Dnipro, etc. It will also include a live coverage of the Live shows, together with encores in the afternoon for late viewers to catch up with the contest. During the contest, it was also said that the nation will be voting in both semi-finals, and will appear in the 2nd half of the grand final, specifically in 19th position. During the results show, Delta brought the country back to the final in the 7th edition for placing 4th in the grand final, with 170 points with the juries (4th), and 129 points with the televote (7th), making a total of 294 points. Australia still continued with their participation in the contest after getting a 4th place in the previous edition, and thus automatically qualifying to the final. The country used the now renamed NS, The Next Voice 02, and started on the start of June 2018 with Peking Duk (together with Sarah Aarons) winning the NS with the song "Fire". SBS also confirmed that another special coverage will be held for the seventh edition called Do It All for Australia | The Europa Song Contest 7 Coverage. During the results show, Australia finished 26th (last) with the juries with 41 points, and 11th with the televoting with 108 points, finishing 22nd place overall with 149 points, the worst result of the country up to date.

Despite the result, the country still continued their participation, and confirmed for the Europa Song Contest 8 that will be held in Sarajevo. The broadcaster revised the NS format and only accepted 12 songs to participate in the 3rd edition, with 2 semis having 6 songs each. The winner with a margin of 32 points was Bobby Andonov with his song Apartment with 108 points, ahead of the runner-up with 76 points. He made a promotional tour across Australia, then flew to FYR Macedonia, the home country of his parents, to have a promotional tour as well. After a few days, he flew to Sarajevo to start rehearsing for the contest. After qualifying from the first semi-final event of the country, he finished XXth with the juries with XX points, and XXth with the televoting with XX points, thus finishing XXth place overall with XX points.

These are the statistics of Australia since the sixth edition . The tables list the points given or received by Australia in the semi-finals, the finals and a total of both.

As of the sixth edition, Australia has awarded a total of six 12 points and has received eleven 12 points through the semi-finals and the finals of the editions.

Sweden has received a total of four 12 points, making it the country with the most 12 points from Australia

Australia has so far competed in a total of 4 shows ‒ 1 semi-final and 3 finals. The country has both experienced being in both halves.

Table key
First half
Second half

The country participated in 2 shows but broadcast all shows from the first edition until seventh edition. The country's viewing figures progressed as time passed by and the contest gained more popularity in Australia. The figures greatly increased from the 6th edition due to the start of the Australian participation in the contest. The peak viewership as of the 8th of August 2018, was the grand final of the seventh edition with 1.72 million viewers, and also held the record for the most watched edition earning an average viewer count of 1.49 million. 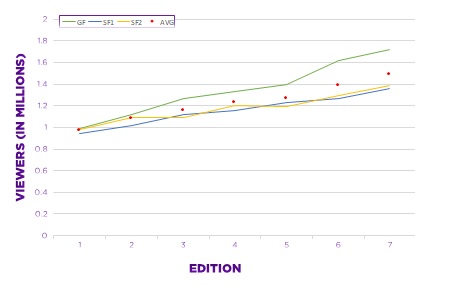 Australia made their debut in the fourth edition (for ESC 6). It was a contest for entries that failed to represent their country in their respective national selections. Their best result was 4th in the 7th edition.

Retrieved from "https://eusc.fandom.com/wiki/Australia?oldid=11625"
Community content is available under CC-BY-SA unless otherwise noted.